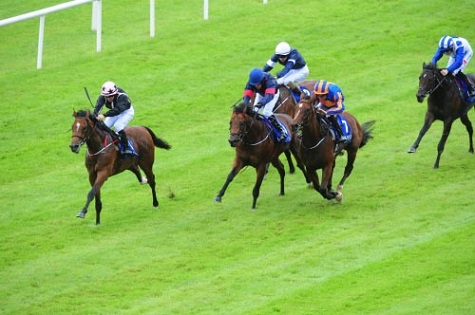 Alexios Komnenos made a winning debut in what is traditionally a very strong maiden. He came through from midfield to make his challenge nearing the last furlong and went to the line in fine style to see off Inca Gold. He is the first winner out of the dual scorer Alexiade (Montjeu), who is a half-sister to the Listed-placed Colossal (Grand Lodge) and In Anticipation (Sadler’s Wells).

“I was a bit worried about the ground, as he’s such a good mover” Fozzy said. “It was slower than ideal and Wayne said it was a bit slower than yesterday. He’s nicely bred from a Moyglare family and is out of a Montjeu mare, so he should get a mile no problem. He’s still a bit weak, so we’ll take our time. He’s always worked well and I expected him to run a nice race.” (Thoroughbred Daily News)

Alexios Komnenos pedigree includes the high-class Moyglare Stud homebred Irresistible Jewel (Ire) (Danehill), who won the Gr.2 Ribblesdale S. and G3 Blandford S. and was second in the Gr.1 Prix de l’Opera. Like her, Alexios Komnenos boasts the Gr.1 Acorn S. heroine Aptostar (Fappiano) as his second dam and she in turn is a half-sister to the GSW sire Man Alright. (Thoroughbred Daily News)